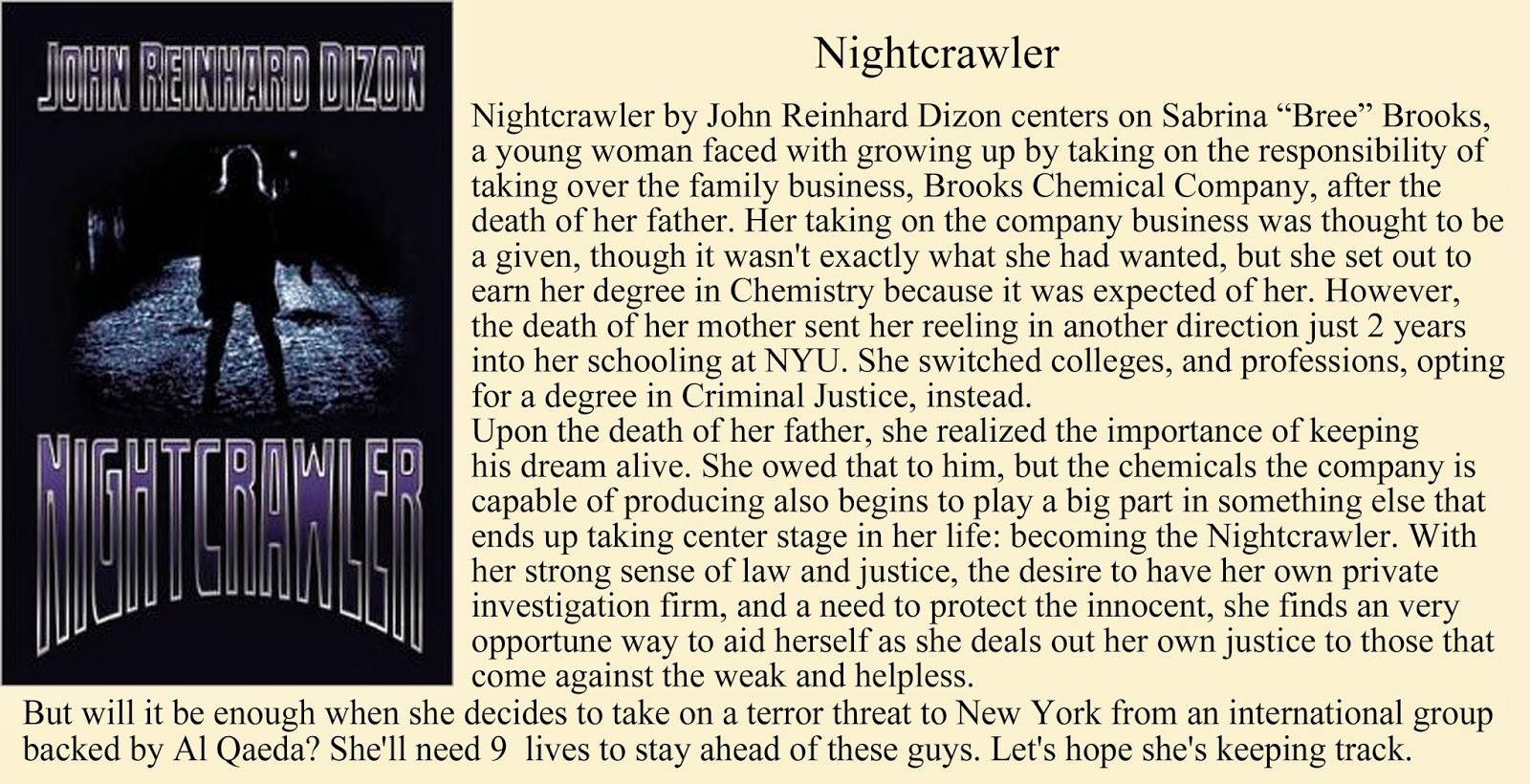 I enjoyed Nightcrawler by John Reinhard Dizon and give it 5 Stars. This story is quite eclectic, but unlike other books with such elements, I never felt lost in a dizzying array of characters and sub-plots. Strong character building brings this story depth, and strong storytelling brought to life the situations that these characters had to go through. I appreciated the fact that the story didn't get hijacked by too much romance between Bree and Hoyt, what the author did show of it was just right. Some of the fight scenes were spoken about after the fact rather than shown in detail, but I didn't mind this. Even though it made me do a double take at first, it worked for me. I didn't feel the fight scenes were a pivotal part of the true message of the story anyway, it goes deeper than that. In a perfectly fluid motion, the author led me through this story with no bumps in the road. This story is well written, and I appreciated the lack of grammatical and punctuation errors.


Q. John, thanks for joining me! With over 25 years of writing experience under your belt, and 16 books to your name, you're no stranger to the industry. What actually sparked your desire to write that first story?

A. I started writing dialogue for my stick-figure cartoons when I first got out of diapers, and I wrote my first novella when I was in sixth grade. I’ve always had a good story to tell.


Q. The sign of true talent, I'd say! Many authors tell me of one obstacle or another that they have to climb over every few months. After 25 years of writing, what would you say has been the obstacle you find yourself climbing over on more than one occasion?

A. At this stage of the game, I’m trying to get as much done as possible before the spark (or the writer) dies. I’d hate to walk away from the table thinking I left one subject, one great idea, or one awesome character unwritten.


Q. You have quite a resume. With all you have pursued over the past 25 years, frankly I'm shocked you've been able to put out as many books as you have. How do you make time for writing?

A. Right now I’ve gone into this full-time. I’m giving it a year to happen before I start looking for another day job. Win or lose, this has been one of the most self-fulfilling times of my life.


Q. With as many books as you have out, and the quality of your storytelling, you shouldn't have a problem. I took a peek inside Wolf Man, a book you released back in November 2013. It looks like one I'd be interested in picking up. Of all your books, do you have a favorite?

A. I’m having to go with Nightcrawler, which is the one you reviewed. Bree Brooks is one of my favorite characters. She’s so feminine and charming, yet she fights like a man and has the heart of a lion. Dalibor “The Reaper” Branko is one of my most fearsome villains. The Christian and LGBT dialogues were profound in exploring their communities and interactions with the NYC macrocosm. Right now I’m working on Nightcrawler II which I expect to be a worthy sequel in following Bree’s development as a person and a pillar of the community.


Q. I did like her qualities. Of all your titles, which was the hardest for you to write, if any, and why?

A. Generations II was pretty hard because I had written the first version two decades ago, and it turned out to be more action/adventure rather than a family saga. I had to put a different spin on it, giving less glory and glitz to my grandfather and more illumination of the legacy he left behind as a family man and a community leader. One of the hardest things in writing is the rewriting and editing. It’s kinda like having to tear down a room addition on your house and start all over again.


Q. I enjoyed Nightcrawler. Your use of diverse characters was refreshing. In my 32 years of reading books, I have to confess that not one of them has ever had gay characters in it, and certainly didn't mention the LGBT community at all. Every aspect of your story worked so well together. Why do you suppose other writers don't broaden their scope to include a segment of people that are obviously a part of many people's lives?

A. It was a big challenge I took on to see if I could do it. Most people who write about gays are either members of the community preaching to the choir or build caricatures that, unfortunately, are the token characters we find in racial stereotypes. In creating gay lovers, family men, activists and super villains, I had a wide range of personalities that was impossible to stereotype. I think most writers would find themselves too uncomfortable with the enormity of the task (not to infer hubris on my part). I’ve had over twenty reviews of the book from a wide variety of people and none have accused me of an unfair representation.


Q. I think the diversity with which you write shows a more realistic view of the world we now live in, so I can't imagine anyone having a complaint there. One area that caught me off guard, at first, was the way you handled the fight scenes in your book. What was your thought behind glossing over, and at one point, skipping over your fight scenes for Bree, though they were detailed in narrative and dialogue after the fact.


A. I was studiously trying to avoid having this pigeonholed as a superhero novel. Developing Bree’s character early on kinda derailed that criticism. I knew that if I skipped that first fight scene, it would have convinced most readers that this wasn’t as much about the Nightcrawler as it was about Bree. Plus we dove headfirst into the LGBT subplot, which was like a second derailment. There was also the women’s fiction angle, detailing all the challenges she faced as a female CEO trying to follow in her father’s footsteps in a male-dominated industry. By the time the reader gets to the midpoint of the book, they realize this isn’t a run-of-the-mill superhero novel.

Q. I didn't mind it, personally, but I think it did catch others off guard, as well, and some never recovered from the surprise. But I think anyone would be hard pressed to say it was a bad story because of it. It was the right way to keep the super-hero tag from being slapped on the story. I, for one, also appreciated the fact that the book was pretty much error free, and well written. What do you have in the works right now?

A. Of the twenty-odd reviews on Amazon, I can only think of one that stated they were disappointed that they didn’t get blow-by-blow details of the Statue of Liberty scene. Another said that the story took too long to develop. Obviously they were looking for a female Batman novel. Right now I’m working on Nightcrawler II – Tryzub which is about a terrorist group trying to take control of the heroin trade in the Russian community in New York. This one’s more about her fiancée, Hoyt Wexford, as he gets drawn into a web of corruption in the Brooklyn NYPD, and is exposed to greater danger in getting closer to the Tryzub terror gang. Bree and the Nightcrawler take more of a passive role in allowing Hoyt to realize his own potential as a detective, though we know she won’t stay on the sidelines for long.


Q. No, I'm sure she won't, at least I'm hoping not. Any parting comments you'd like to leave my readers with?


A. I truly appreciate you doing the research and pointing out the wide variety of subjects and issues presented in the JRD brand of novels. I encourage readers to check out my author page at Amazon http://www.amazon.com/John-Reinhard-Dizon/e/B00DU9JNUQ/ref=ntt_athr_dp_pel_pop_1 to see that I’ve got a little bit of everything for everyone.


You certainly do! I saw one more I'd like to get, and once I check out the others, I bet I find at least one more. Thank you for your time, John, I wish you much success going forward, and hope to meet up with you again in the future!

﻿
Chameleon Author
Posted by Unknown at 12:22 AM No comments: