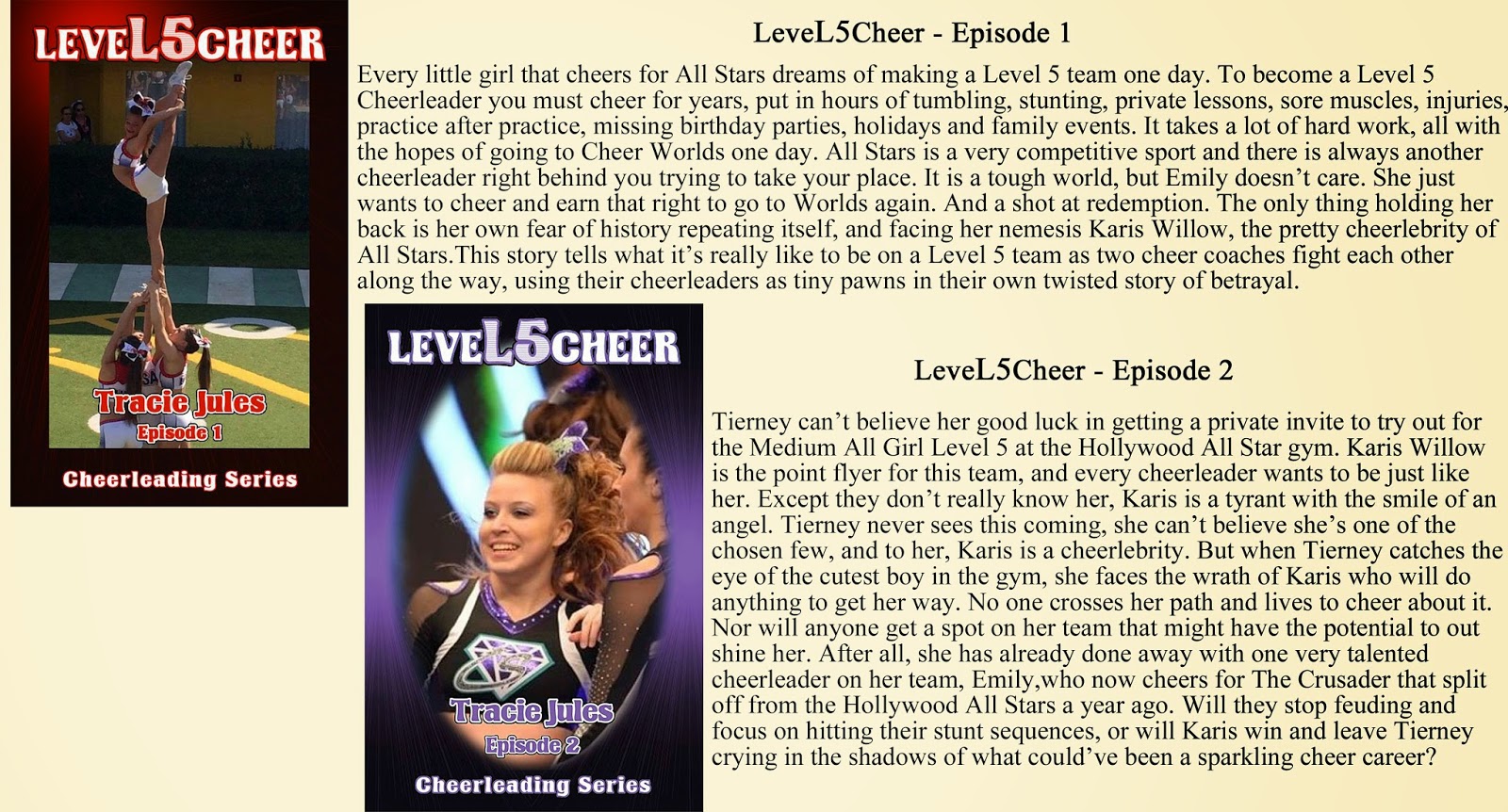 Tracie, thank you for taking the time to join me!


Q. You are definitely a woman of great talents, how do you possibly find time for it all with five children, three grandchildren, a husband, and a household to run? Just being an author would be challenging enough, but screenwriter, actress, and director, as well? That's amazing!


A. I will admit that my family refers to my housekeeping as OCD. So with that said, yes, I am very busy and I burn the candle at both ends constantly but I wouldn't have it any other way. I love working hard, taking care of my family (cooking is a passion) and cleaning house. Although when I'm editing either my books or my film work I will admit that my house suffers a bit. I had my first child when I was 20, so all of my children are basically adults now. Their ages are 32, 30, 25, 22, and 14.


Ahhh, ok, that does free up a little time, then.


Q. I've read both episodes of LeveL5Cheer, and I have to admit that, although I know nothing about cheerleading, I was hooked! What prompted you to write about this fascinating sport?

A. My daughter has been an All Star cheerleader since she was 11 years old. She made an L5 team when she was only 13 and still cheers to this day at the age of 22. I had been in the industry (film/TV) for some time and when the gymnastics show “Make it or Break it” came out, I realized that there were a lot of the cheerleaders watching this show because there wasn't a “cheer” show on TV. Most the cheer movies didn't represent what actually took place behind the scenes of an All Star team or what it takes to actually make a L5 team and compete in that division. It was based on this idea that I decided to create a web series about real cheerleading and with the encouragement of Tom Townsend I also created the book. I am so glad that I did.


Q. I was a little shocked at how fierce these athletes actually are. When we see them cheer at sporting events, honestly, it looks like a lot of fun, but you show us a behind the scenes look that isn't always so fun. Is it really a lot of blood, sweat, and tears?


A. It truly is and that was what I found was missing from all of the shows that depict cheerleading or the movies that have surfaced. These kids are athletes and they do incur injuries along the way. I have witnessed girls in competition losing teeth to a flyer that came down out of position, then the cheerleader starts looking for her tooth on the mat after the competition. I have also witnessed girls blowing out their knee, breaking ankles or tearing their ACL (most common cheer injury) and continuing in the competition to try and finish their dance. I am not kidding!


At the end of their cheer career is college. Many of these girls and boys will go on to cheer for college but only a few will actually get scholarships. It is a very tough, demanding sport that challenges the athlete to always strive for a new skill either in tumbling, flying or stunting if you're a base. The more gifted the cheerleader, the more opportunities that are waiting around the corner at a D1 school.


Q. From the reactions of some of the parents, it's clear that it's almost as tense and stressful for them at times as it is for their children, maybe even more so.


A. Unfortunately there is the saying in cheer about the “cheer mom” trying to live through her daughter or son. That certainly isn't the case with every child but there are some notorious moms or dads out there. And I believe you have that in every sport, not just cheer. They want their child to succeed, to be the best and some of them will stop at nothing to get there. It's funny but when some of the parents read the book they quickly said they knew a few “cheer moms” like that! I didn't base Patrice on anyone, I just had fun creating her.


Q. Your character building was fantastic, you really eased me right into a connection with them. Are any based on people you actually know?


A. Yes and No. The character Alexa was based on my daughter as she is a tough, fearless competitor but she isn't nasty like that to other cheerleaders, straight forward maybe, but not mean. The inspiration behind Valerie is a beautiful cheer coach that coached my daughter early on in her career and she is sweet like Valerie. For the most part I am a very creative individual that loves to create character's that we somehow see someone we know in them. To me that helps the audience connect.


Q. How many episodes do you have plans for before the electrifying showdown at Cheer World?


A. Honestly to get to Cheerleading Worlds it takes an entire year of conditioning, practice and many local and national competitions to even be considered for a bid. We will follow the cheerleaders to their first national and touch on other local or bid comps as well as get a real, gritty look at what it takes to get that bid. I will keep it as real as possible even though we have made up character's, gyms and competitions.


Q. Something tells me we can look forward to more than one huge upset on that day. Is that right?


A. Just as in life...anything can happen at Cheer Worlds and has happened!


Q. Do you have a release date for LeveL5Cheer, Episode 3, yet?


A. It is ¾ of the way written and I have already outlined Episode 4.


Great! I'm definitely looking forward to seeing what the girls and boys of LeveL5Cheer are up to next!


Q. Aside from the next Episodes for LeveL5Cheer, are you working on any other projects we can look forward to in the near future?


A. I directed a web series that I wrote called Spirit Hunters-The Series. Our series aired on local television, ran for two season, and had a following on YouTube. I have already started penning that series as it follows Hunter, a boy who can see and talk to ghosts, and what his life is like when he becomes the new kid in town.


I can see all kinds of scary plot twists coming from a plot like that! Thanks again for joining me Tracie! You can find Tracie's books here: